So I’m a huge believer/supporter/advocate of the Law of Attraction.  I’ve used it successfully for some things, and I’ve struggled with it for other things.  It’s a fascinating philosophy, and I firmly believe it has a lot of validity.  There is also scientific basis that the ideology works – although no one really knows how.  I was startled when I took a class in Positive Psychology to read a lot of ideas I’d already encountered in my LOA material.

But this blog post is not what the Law of Attraction is about, or even how to use it.  There are tons of other blogs for that.  (This one is by far my favorite.)  This blog post is how I used a vision board to accidentally get exactly what I wanted . . . years later.

About five years ago, a friend of mine was downsizing because he was moving out of state.  He had a ton of books, and gave me two boxes of Star Trek books.  I love sci-fi, and I love Star Trek, so . . . win!  One of the books was this one. 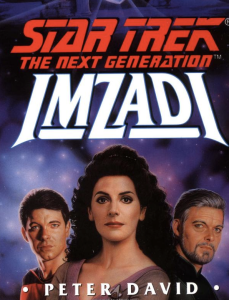 It’s the story of how Riker and Troi met on Betazoid.

On the show Star Trek The Next Generation, Troi called Riker Imzadi – a Betazoid word.  I don’t remember them ever explaining it in the show.  When The Next Generation started, Riker and Troi had already been in a relationship and broken up.  Throughout the show, they stayed close friends, but it wasn’t until the movies that they fell in love again and got married.  I had always liked their relationship, and was excited to get this book and learn their backstory.  In this book, Troi tells Riker what Imzadi means.  She tells him it means “The first.”  He gets all flustered – telling her that she wasn’t his “first” and she just smiles at him and answers:
“Other women may have had your body . . . .  but I’m the first who’s ever touched your soul.”

I decided I wanted an “Imzadi!”  I wanted someone who touched my soul.

So I decided to put it on my vision board.  I printed out a picture of Riker and Troi, and thumbtacked the words “Imzadi” over it with an order to the universe to bring me my Imzadi.  I stuck it beside affirmations for money, an automatic cat box I wanted, and a postcard from the recent Nashville Film Festival that was a Scrabble tile with the letter “Q” on it.  I had stuck that one up there for fun to see what the universe would manifest for me.  I remember focusing on the idea of Imzadi every night – wanting a man who loved my soul like Riker loved Troi.

Including Jonathan Frakes and Marina Sirtis.  You know . . . THE ACTORS WHO PLAYED RIKER AND TROI.

WHO PLAYED A CHARACTER NAMED Q.

Yes, I enjoyed the Star Trek Convention.  I bought a Tribble I named Tiberius.  I thoroughly enjoyed watching Frakes and Sirtis onstage – Frakes is hilarious.  I met new friends.  It was a great time.

I went home that night and looked at my vision board (as I did every night) in reflection for the things I was trying to bring into my realm of existence.

I stared for a minute at the picture of Riker and Troi.

Then I did a stereotypical *facepalm*.

I ripped their picture off my vision board, tearing it into pieces, and shook my fist at the universe, screaming, “That IS NOT what I meant!!!!!!!”  Then followed my outburst with swearing and crying.

There was a lot of swearing and crying back in those days.

After I calmed down, I realized what the Q postcard had manifested, and I believe the ripping of that off the board was followed by that laughing-crying thing girls do when they’re overwhelmed with irritable emotions tinged with humor for a situation.

I left the words “Imzadi” up there for over a year before I finally ripped that off the wall in a fit of rage that I believe also involved ripping the whole vision board off the wall, breaking it in half, and throwing it across the room.

Yeah, I can lean towards the dramatic.

I hadn’t thought about that vision board experience in a long time.  I had healed inside, grown stronger . . .  stopped looking outward for validation and directed my attention to healing my own damn soul instead of finding someone else to fix it.  Somewhere along this journey of healing and self-discovery, I found the love of my life.  We grew closer and closer and made plans to marry.  During the hammering-out-of-wedding-details phase, I asked him if he wanted to do the traditional vow thing, or write vows.  He suggested writing our vows for each other . . . which I found out later began as a joke, but I leaped on as something cool and quirky and personable and fun.  So we did.  I wrote the vows he said to me, and he wrote the vows I said to him – each of us never seeing these words until we were standing up at our wedding.

Chad had asked me about my vows I wrote for him . . . “Are you all serious, or are you funny?  Did you put jokes in there?  No really, what kind of tone did you use??!”  I refused to tell him.  Finally, I relented a teensy bit, telling him only, “You KNOW me.  Am I ever 100% serious?  Or even 100% funny?  There’s a good dose of seriousness and hilariousness in most everything that comes out of my mouth.”  That seemed to satisfy him, and I approached our wedding day with the hope he would give me something to read that was personable and humorous with overtones of seriousness and a dash of in-jokes.

The night arrives.  I’m standing in front of friends and family.  He’s read my vows I wrote.  He’s laughed.  He’s got tears in his eyes.  I internally patted myself on the back for vows well-written and hoped that what I was going to read was half as good as the brilliance I had penned.  I silently hoped it wasn’t all mush and gush and full of generic sentiment and no personality.  I unrolled the words my future husband had written for me to say to him on our most important day ever . . .

The word at the top left was “Imzadi.”

I blinked back tears.

I tried to say the word.  Failed.  Tried again.  Failed.  Took a deep breath, started reading through tears, and realized I was reading the wedding vows from Riker and Troi’s wedding.  Then the words changed, and I realized I was reading other words from other weddings.  Chad had taken the wedding vows from mine and his favorite fictional characters’ weddings, and mashed them up into the vows I said to him.

Then he threw in his own words.

Then he Rick Rolled me.

Then he finished with the final line from Phoebe’s wedding from Friends . . . another couple who had a winter wedding outside . . . when I had started his vows with a Phoebe/Mike joke that became our personal joke.

It was the most perfect thing I could’ve ever asked for.  And the words said everything I wanted to say to him . . . and more.

I love this man.

Who had absolutely no idea that he was fulfilling a vision board wish from years ago – with one word.

Imzadi, my beloved soulmate.  I take you to be my husband from here to eternity.  My soul is yours forever, for Imzadi is forever.

I honor you, I love you, I marry you

I will love you my whole life; you and no other

And before I knew you, I was like a completely different person.  Not even a person, really.  And I had seen what love could do to people, and it was hurt and sadness.  Alone was better.  And then, suddenly there was you, and… you knew me.  You saw me, and it was this… thing.  You make me feel safe and warm.

Such was your courage that you did not run, and did not strike me.  You accepted me, as no one else had done before.

Oh, and um, I love you… and you have nice eyes.

Passages from:
– William Riker and Deanna Troi – Star Trek, The New Generation
– Dexter and Rita – Dexter
– William and Murron – Braveheart (this movie is why Chad always wanted a small outdoor wedding)
– Anya’s vows to Xander – Buffy the Vampire Slayer (this episode is where we got the idea for a destination wedding)
– Mara Jade’s vows to Luke Skywalker at their wedding
– Chad’s words . . .
– The Rick Roll
– Phoebe’s final words of her vows to Mike – Friends